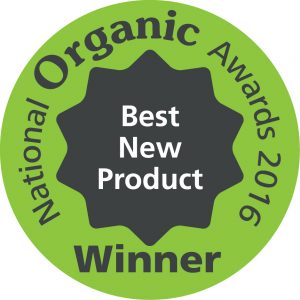 The brilliant team at Ummera: Andrew, Jonathan, Sheila and Steve with the award for the Best New Organic Product of the year!

The latest figures from Kantar Worldpanel indicate a significant upturn for the Irish organic sector. Building on the momentum of last year’s growth of over 6%, the new figures, published by Bord Bia today, show a further year on year increase of 23.7% to bring the total value of organic grocery sales to €142 million.

The figures were announced today during the National Organic Awards which took place in Bord Bia’s Dublin headquarters. Over 70 industry representatives gathered for the event which rewards quality and excellence within the Irish organic sector across categories including best new product, chef’s choice, export and innovation.

Following rigorous judging of some 278 individual products, a record high level of entries, seven organic food companies were selected as overall category winners. Two Leitrim food businesses were among the top seven. The Organic Centre, based in Rossinver, won Best Fresh Product Award for its Organic Salad Bag, a selection of mixed salad leaves with edible flowers and herbs, which the judges noted was a clear winner as it “simply epitomised organic”, while the Best Prepared Product Award went to Drumshambo’s Blake’s Always Organic for its Culture Blend Coffee.

Based in Timoleague, Co.Cork Ummera Smoked Products won the Best New Product award for its Smoked Organic Picanha Beef made using the rump cap cut of beef, which the judges noted as “exceptional”. The business, a smokehouse in operation for over 40 years, currently supplies the product to a number of hotels and restaurants nationwide. Flahavan’s Irish Organic Porridge, which is exported to over 11 countries including UAE, Russia and South Korea, was awarded the Export Award.

Other deserving award winners today included Highbank Orchards in Kilkenny, whose Orchard Syrup picked up the Chefs’ Choice Award, a new category for 2016, for its versatility in the kitchen; Mulberry Meadow Organic Farm based in Monaghan won the Innovation Award for its My Organics Living Salad – Salad Bowl Mix. The judges considered the “vibrant” product as unique within the sector. Finally, Galway’s Green Earth Organics received the Direct Selling Award for its 100% Irish Veg Box, which the business sells online making it easy for shoppers to access locally-grown, organic produce.

Earlier this week, the Minister of State for the Department of Agriculture, Food and the Marine, Andrew Doyle TD announced a financial boost for the Irish organic sector. Speaking today, Minister Doyle said “my Department’s commitment to the development of the organic sector was underlined by the announcement of €10m in funding for the sector in Budget 2017. The importance of our indigenous agriculture and food industry has never been as high. It is fundamental to our export led economic recovery and the Organic Sector can pay an important role in this development.”

He added “the quality of Irish organic produce submitted for this awards competition, clearly shows that Irish organic food has the high quality and standard required to compete on the world stage. Today is a celebration of your achievements as Irish organic food and drink manufacturers and I wish you every success”.

In response to the recent growth figures Aidan Cotter, Chief Executive, Bord Bia commented “The welcomed increase in organic food sales in Ireland reflects a similar trend across many other European markets. Consumers growing interest in health and wellness has bolstered the sector and will continue to provide further growth opportunities for Irish organic suppliers, at home and abroad. It is particularly positive news for today’s awards winners and finalists, who excel in their respective categories, as they are now best positioned to benefit from this upturn.” 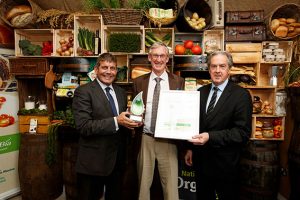 This year, in addition to participation at Biofach, the world’s largest organic congress and key European trade fair, Bord Bia coordinated a series of organic focused market study visits to Germany, the UK, Netherlands and Scandinavia to explore potential new export opportunities for organic producers.  ”As part of the European Union, we have access to the second largest organic market in the world, after the US. Valued at approximately €25 billion, Europe represents 45% of global organic revenue and it is expected to reach almost €38 billion by 2020*” added Mr. Cotter. “Bord Bia is fully committed to doing everything in its power to support this sector reach its full potential.”

Meanwhile, on the domestic front, almost 94% of Irish shoppers are reported to purchase organic goods, on average once every two weeks. According to Kantar data, Irish consumers are making more organic purchasing trips, with organic becoming more accessible with smaller pack formats and more affordable organic products on offer.

Established by the National Organic Plan under the auspices of the Department of Agriculture, Food and the Marine in collaboration with Bord Bia, the objective of the National Organic Awards is to recognise the achievements and raise the profile of Irish organic food and drink manufacturers and growers. Now in their 8th year, the awards are recognised as an important fixture for the organic food and drink industry.