We had an email yesterday from a friend and customer from Waterford saying that a couple of days ago he was listening to The Right Hook, a current affairs program on Newstalk Radio, and heard Ummera Smokehouse mentioned, along with Stonewell Cider, my brother-in-law’s very successful craft cider business.

Curiosity grabbed me and I tracked down the Podcast of the show. The only relevant one was entitled “Manchan returns, and takes George to Irish breweries”, relevant because of the Stonewell Cider connection to craft breweries.

Manchan Magan stood as a Green Party candidate in the recent General Election and is a broadcaster on travel on The Right Hook. However, in yesterday’s programme he was talking, after a few minutes discussion on his Election campaign, about Craft Brewery Tours in particular and he mentioned Mia Tobin of Brewery Hops, a small group tour business specialising in such tours. And Manchan mentioned Ummera Smokehouse as one of the stops on their way from Kinsale (home of Stonewell Cider and also Blacks Brewery) to Killarney! 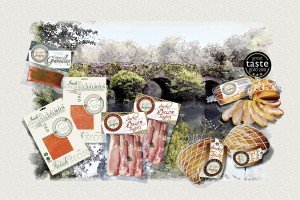 Last year we were very happy to receive several groups with Mia for a smokehouse tour. One of the visitors came from Hawaii and we were more than happy to send her a side of smoked salmon in September! The last time we sent something to Hawaii was smoked eel in 2011 just before they became an endangered species. Read about it here! There was also a couple from Italy who were setting up an Irish Country Pub in Liguria and were planning on serving up real Irish food.

Now this is where the Coincidence comes into play because a few hours after the Right Hook show, and Manchan and George had finished talking about brewery tours, lo and behold we received our very first order from Sabrina and Eugenio in Liguria, Italy!

Do you really believe that they were listening to George Hook and Manchan Magan yesterday?

Listen to the podcast and all about Irish Craft Beers by clicking here.

2 thoughts on “Coincidence and a Smokehouse Tour!”